Above: My latest three books chuck full of important information.
Below: My first six books also loaded up with stuff you won't read anywhere else!
All NINE books are available signed – directly from the author.
​Send an email to jamesamcquiston@gmail.com to make arrangements.

Since the autumn of 2016 through 2022, I've written nine books on Oak Island. I have been invited to the island several times to have my theories filmed in the famous Oak Island "War Room," and at the nearby mysterious "castle" foundation at New Ross. See more information on each book at the bottom of this page. A few years ago my basic theory rated #6 out of 25 on a special episode of the Top 25 Theories of The Curse of Oak Island TV Show. It now appears to have floated even higher with Rick stating at the end of the 2020-21 season, "When you ask the who, what, when, where, why and how, I think James, above all the others, really deals with that… I can tell you what, James is not giving up."

I've appeared on The Curse of Oak Island and/or Drilling Deeper nearly a dozen times and have visited the island even more times than that. The Oak Island team has listened to and filmed my theories for about 20 hours now.

After my book Oak Island Knights, which first revealed the most complete version of my theory, I released my fourth non-fiction book Oak Island Endgame, which explored many new proofs of my theory attained during a visit to Oak Island in 2019. Almost immediately I went into writing my first fictionalized version of my theory. This allowed me to fill in a lot of the daily and yearly events, while sticking to the history. This book is called Oak Island The Novel. It is 200 pages filled with courtly intrigue, swashbuckling seafarers, great love affairs, and of course, stolen treasure buried on an island! But fate wouldn't have me stop there and I, once again, immediately dug into a connection of Oak Island to passengers on the Mayflower, and other early settlers around Plymouth, Massachusetts. Again, my findings were remarkable and so I had to get them into a new book called Oak Island And The Mayflower.

Soon, I released my seventh Oak Island book studying the connection between Oak Island and the mysterious foundation and water well found less than 20 miles away at New Ross. I've made a few discoveries that were hidden in plain sight all these centuries. Carmen Legge stated my book would "shock" a lot of people. The name of the book is Oak Island And New Ross.

About the time I thought it was "over" for sure, I came upon a whole new set of circumstances and that is what will be covered in my soon-to-be-released book, Oak Island Curses, Codes and Secret Societies. I believe this book has the potential to rewrite some Oak Island history and to solidly link the Freemasons to the Money Pit.

Following directly on the heels of my Curses and Codes book, I wrote a ninth book entitled Oak Island Knights Templar and Freemasonry. I explore the best yet connections between these two organizations ever discovered. I also show how they connect to Oak Island. I think this is going to be it for awhile as I've moved on to write a book on the Skinwalker Ranch mystery due out before Halloween, 2022. It is a bit shorter than my Oak Island books but presents theories never before written about, like most of my books do. That book will be called simply Skinwalker.

Below is one of my favorite photos:  I am with Charles Barkhouse and Doug Crowell in a war room meeting. What great historians! Below that are some short videos to watch, if you are interested. 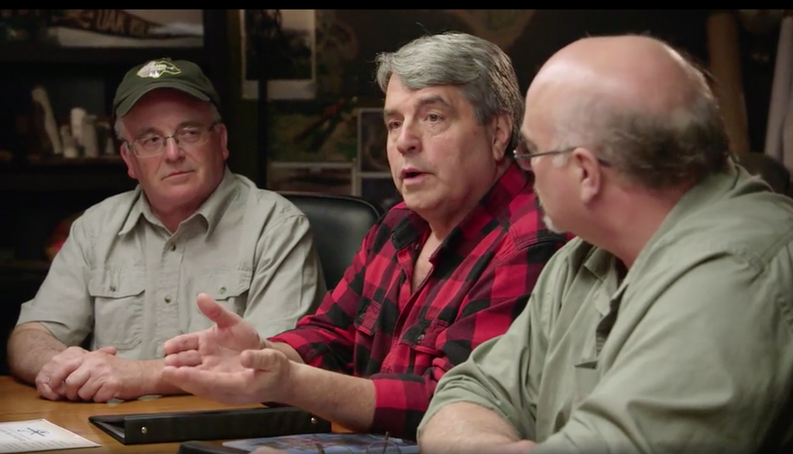 Here's a link to an online webcast I was involved in recently. It has received thousands of views on Facebook and on YouTube, so far.
And below are links to three additional TV appearance I made with a local broadcast Chautauqua Sunrise. The first clip is the show we just finished in April. Skip to about the 18 minute mark where the Oak Island stuff begins. The second clip is from November 30, 2019. The third clip was from 2020. If you wish to skip the local announcements and small talk, I suggest jumping to about minute 16 or so. From there on it is mostly about Oak Island. I missed out in 2021 because of Covid but, in a strange turn of events, Dr. John "Doc" Hamels, Ph.D., helped me with my Oak Island And New Ross book by looking for clues in the 1634 painting, parts of which appear on the cover and inside of that book. He carried out some additional research and, being a Freemason himself, has provided helpful information at least to the degree he is allowed.

​What if historical documents actually tell us what happened?

The history is complex, but the answers are there!